A Slice Across the Horizon 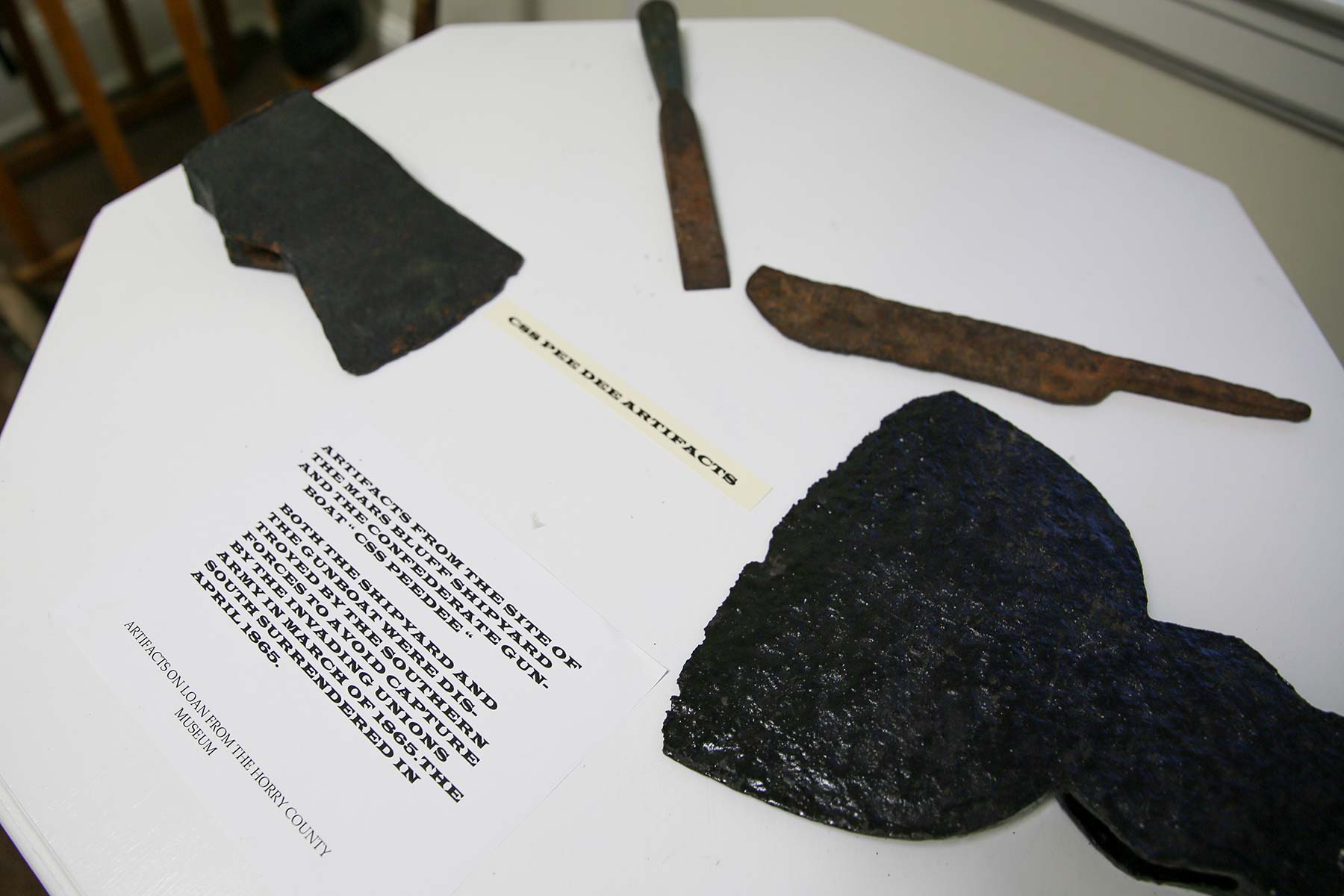 Upstairs in Lynches Lake HistoricalSociety and Museum, there is a room dedicated to SC involvement in a war that wasn’t as Civil as it was supposed to be. This Civil War room holds many artifacts (cannonballs, bibles, parts of the Statehouse), but there is a table that holds artifacts that look ordinary but tell an extraordinary story. On the table lay two axes, a chisel and what looks like a very crude knife. These artifacts tell of a tale from the Confederate side of innovation as well as determination. The artifacts come from the Mars Bluff Naval Yard and most potential from the Confederate State Ship Pee Dee.

During the Civil War the Union had successfully blockade 3,500 miles of Southern States Coastline and the loss of several important naval yards like Nashville, Memphis, and Norfolk that were taken earlier the Confederacy needed to raise more fleets to do everything in their power to outlast the blockade. The South Carolina chosen location was Mars Bluff due to the closeness to Charleston as well as the local resources of the area to help with the production. “Lt. Van Renaisler Morgan (CSN) was assigned to actually construct the Mars Bluff Navy Yard, which was to include some 14 buildings, a saw mill, a forge, a dry-dock and ways for constructing vessels.”[1]“ The launching of CSS Pee Dee in August 1864 was a social event for the local populace. Despite inclement weather, many families most of whom had raised money and provided other services for the cause attended. During 1861-1862southern women formed the Ladies’ Defense League and the Women’s’ Gunboat Fund, raising some $80,000 needed for gunboats. During trials, the gunboat performed well but was unable to make the design-speed of nine knots. In the months leading up to completion of Pee dee much effort was expended to supply and, especially, procure coal for the vessel’s two steam engines.”[2]

The people who worked on this gunboat went on a number of patrols along the river but when Sherman was coming from Atlanta with his “March to the Sea” campaign many people did not know if he was heading to Columbia or Charleston and did not know if he would also stop at the Mars Bluff Naval Yard. In preparation of the incoming enemy forces irreplaceable items were put on trains and sent to Charleston in the hope thatSherman would hit Columbia (He did February17–18, 1865). The Mars Bluff Naval Yard was getting prepared as well they put all important documents and anything necessary onto the ship CSS PeeDee and burned the Naval Yard to the ground in fear that the enemy could steal their diagrams and use it against them. After reaching a safe distance the men unload all the supplies and burned the CSS Pee Dee to the waterline in order to validate the impossibility for the Union to capture any Confederate designs.